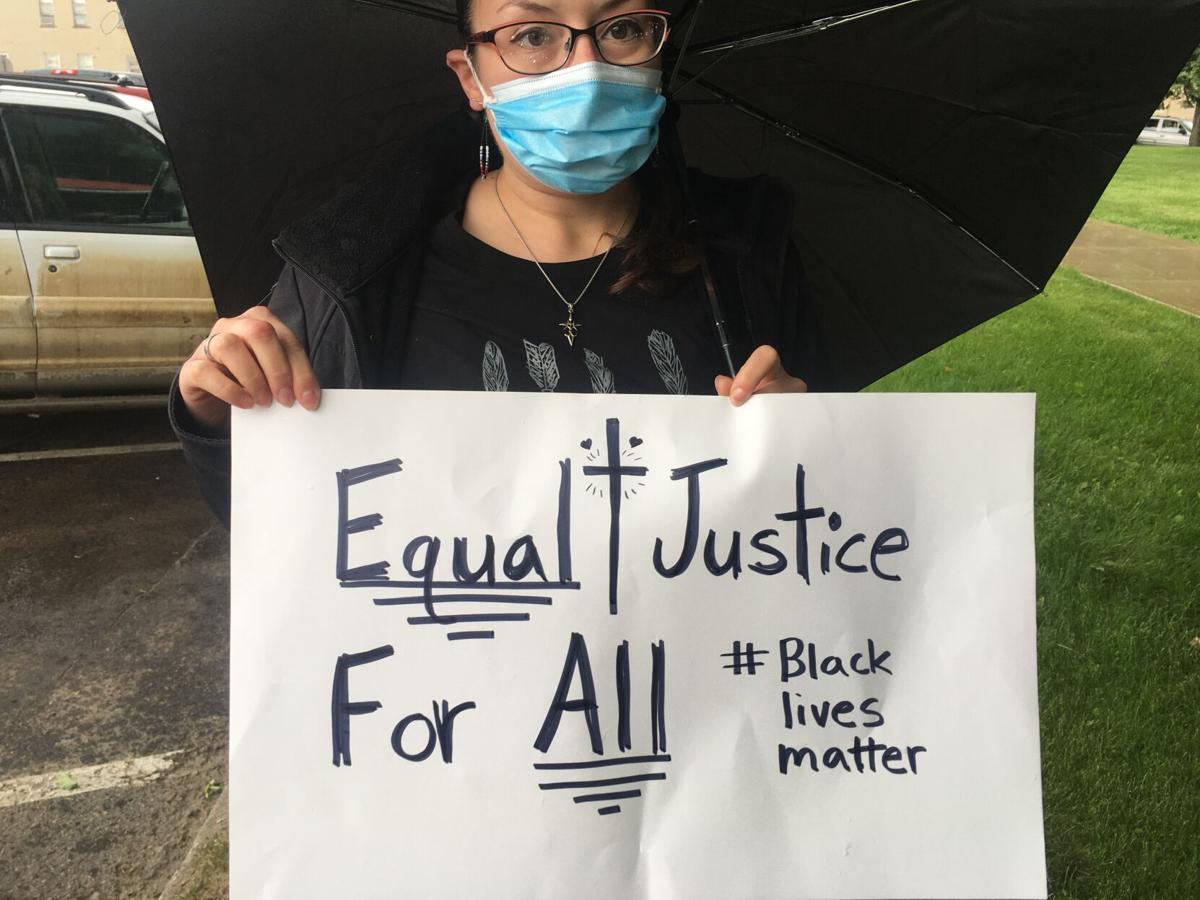 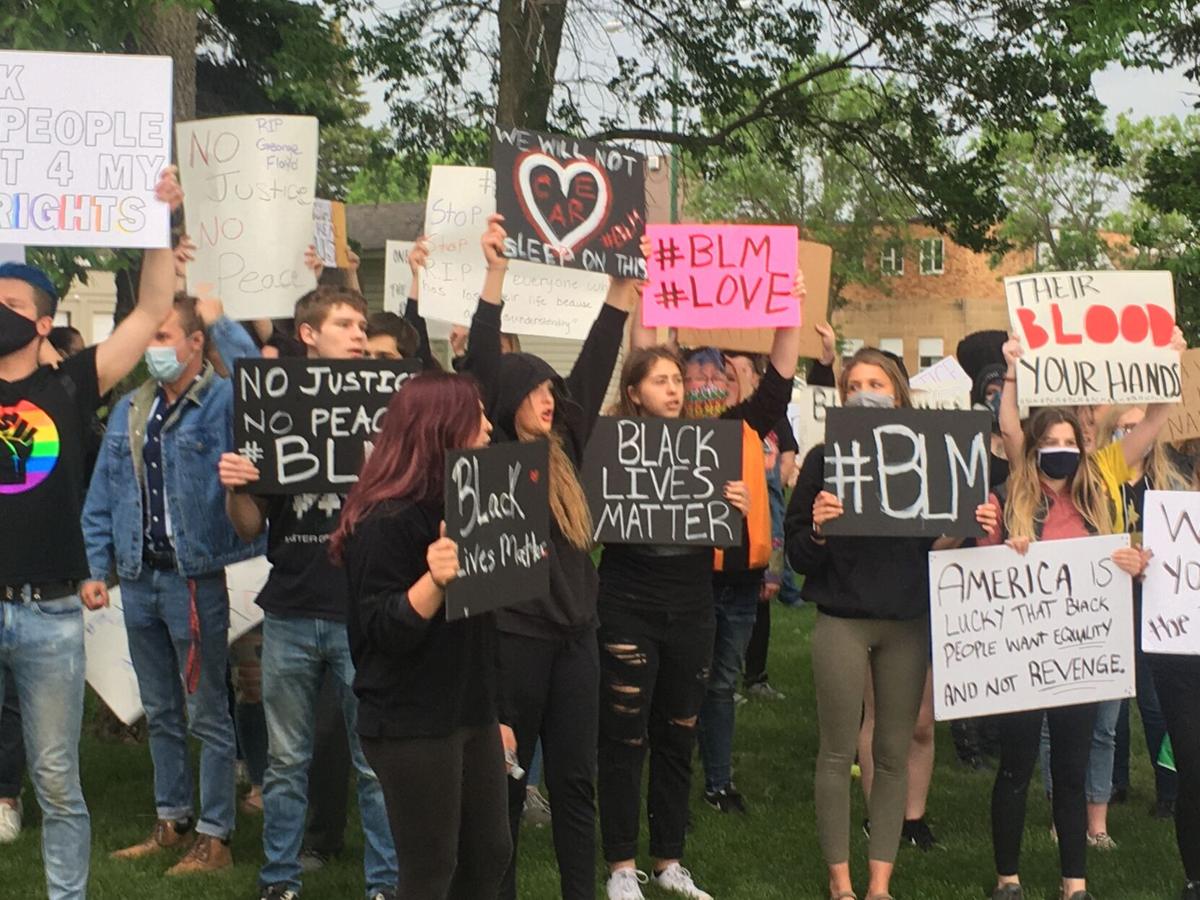 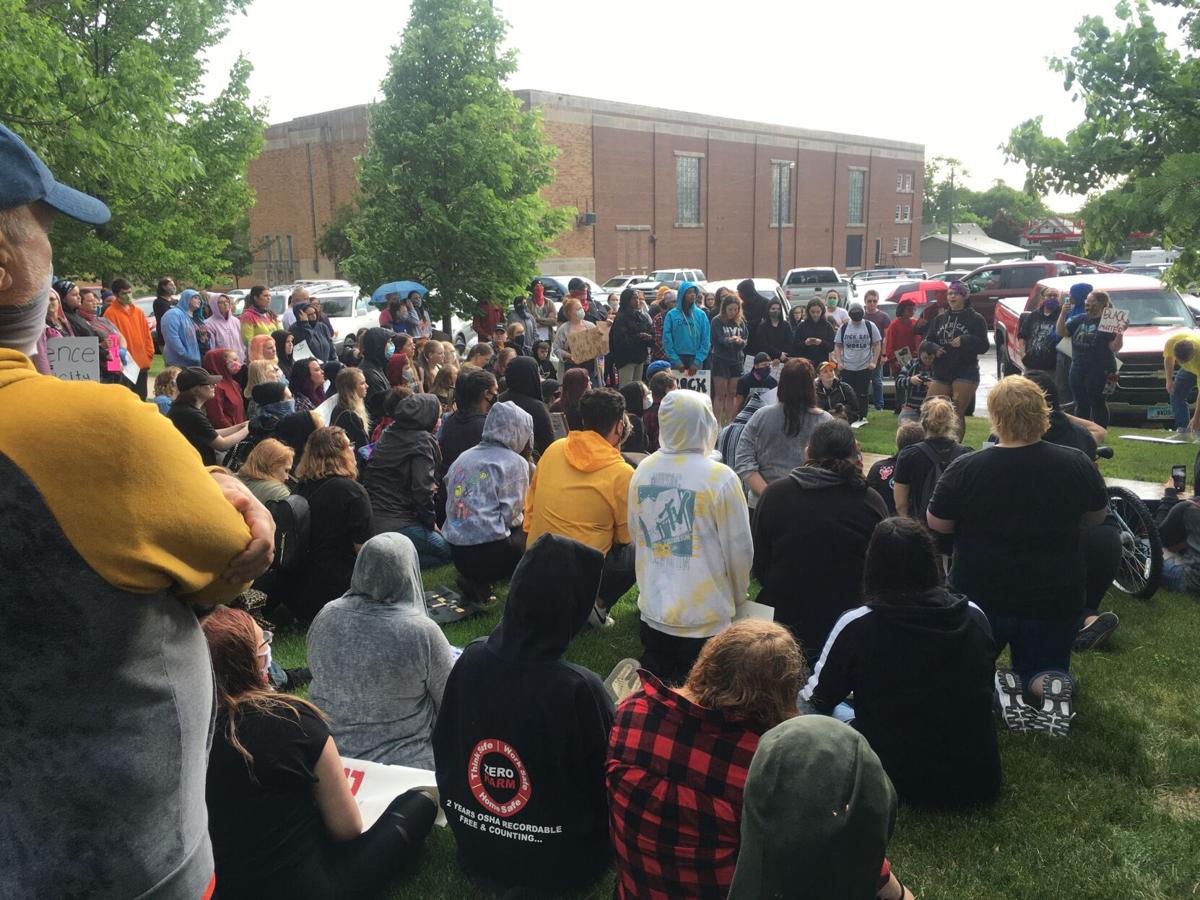 About 300 protestors marched Saturday night in Watertown in honor of George Floyd and to bring attention to racial inequality. The group began their march at Diamond ball Park on 4th Avenue SE shortly after 6pm. They were escorted by the Watertown Police Department, to the Codington County Courthouse. Law Enforcement maintained a visible presence around the courthouse and downtown area while individually those in the crowd who wanted to speak were given an opportunity to do so.

Taelynn Ferrer organized the march. Ferrer says racism is a personal issue to her after she was the victim of it…..

Ferrer says she knew the protest would have a good turnout however, it was better than she anticipated. She said some people were upset about the protest because of all the news around violent protests; however, she says, she does not condone violence….

Ferrer said local law enforcement worked well with her in coordinating the event….

Shortly before 8pm the crowd began to disperse, some walking back to Diamond ball Park, while others separated from the group and went in other directions. Captain Kirk Ellis of the Watertown Police Department said there were no arrests or damage related to the protest and things went “very well.”  Ellis was complimentary of the level of communication between the organizers and the police department in the planning of the event. He said, that level of communication was really appreciated.

A strong weather system moved through the Watertown area last night leaving us .59 of an inch of rain. Mike Connolly … Read more

We're always interested in hearing about news in our community. Let us know what's going on!

After being gone for almost a decade, the Independence Day Fireworks Display returns to Mount Rushmore this year.

South Dakota Attorney General Jason Ravnsborg said today that on the morning of Tuesday, June 2nd, 2020 the Hamlin County Sheriff's Office, Castlewood Ambulance and the Watertown Fire Rescue responded to a call of an unresponsive 2-year-old female at a residence in Castlewood, South Dakota. …

The South Dakota Department of Health reported an additional 2 deaths related to COVID-19 on Thursday. state epidemiologist Dr. Josh Clayton reported the latest numbers during their press conference on Thursday......

June Is Designated as "Move Over Month" in South Dakota

This month has been designated by the South Dakota Legislature as "Move Over Month" in South Dakota. The idea began after Watertown tow operator Dale Jones was struck and killed by a passing motorist while performing his job on January 4th of this year.  The South truck By-pass in Watertown …

Despite the rumors of protests and demonstrations taking place in Watertown last night on social media, there have been  events occurring in cities across the state. Governor Kristi Noem says these events have their purpose....

Communities across South Dakota are watching closely for demonstrations to form after recent events in Sioux Falls caused thousands of dollars in damage to businesses, police vehicles and other personal property.  The demonstration was initially planned as a peaceful event, but turned violen…

On today's "From the Desk of the Mayor" we speak to Mayor Sarah Caron and get a City COVID Update and the Highway 212 Phase 2 DOT Plan as well as many other items.

Codington County Adds One New Case of COVID on Wednesday, Bringing Total to 38

Codington County added one new COVID-19 case on Wednesday. That brings our total cases to 38, 29 of those cases have recovered.

The South Dakota Division of Criminal Investigation has confirmed to KXLG News that they are currently investigating an officer involved shooting that occurred in Day County on Tuesday.  Tim Bormann is the Chief of Staff at the South Dakota Attorney General’s office in Pierre.

Incumbents Do Well In Both Local And State Races

Watertown, SD -- The votes have been counted in the June Primary and it was a good night for incumbents. In the District Two and Four county commission races both incumbents Charlie Waterman and Troy VanDusen respectively have won reelection to their seats for another four years. And in the …

A Sioux Falls man has been sentenced to 84 months in Federal Prison, followed by four years of supervised release, following his conviction in U.S. District Court on Monday.  Charles Olson, age 48, was indicted back on March 9th for conspiracy that occurred between December 1, 2018 and Octob…

The death toll from the coronavirus remained at 62 for the third-straight day as new test results were announced Tuesday by the South Dakota Department of Health.

A Pierre native has been named Administrator for the Avera Gettysburg Hospital.  Kristi Livermont says she has experience working with Avera properties in Mitchell as an Administrative Fellow…

Riddles Jewelry was founded in Webster, SD in 1959 and expanded to nine stories in the 1970’s.  Since that time, the family owned business has grown to over 65 stores in nine different states with the company headquarters in Rapid City.  On Sunday night, Riddles Jewelry on 41st Street in Sio…

Following the riots and looting Sunday night in Sioux Falls, Governor Kristi Noem says that South Dakota is taking measures to ensure that resources are readily available in case they are needed……..

The Watertown City Council met last night and one of the items discussed was the partial re-openinig of the Watertown City Auditorium. Codington County, which is re-opening their facilities today, currently leases two offices from the city in that building for their County Welfare Office and…

Today is Primary election day in South Dakota and that means that many voters will be going to the polls today.  Codington County Auditor Cindy Brugman says as of yesterday over 3,200 absentee ballots had been cast……

The jump in temperatures this week may bring the first real threat of severe weather to much of the northern plains.

The Watertown Street Division would like to remind residents that it is unlawful to deposit leaves or grass into streets/alleys, as per Ordinance 5.0306. Recently there have been issues with localized flooding due to leaves/grass clogging storm drains. Officials say this is a major concern a…

A shooting early Monday has left two airmen dead at the Grand Forks Air Force Base in North Dakota.  The base's emergency services members responded to the shooting, which occurred at 4:30 a.m. and details surrounding the shooting have not been released.

Sioux Falls Police Chief Matt Burns says the police department had a lot of challenges put before them last night as his department dealt with rioting and looting as a result of the protest surrounding the death George Floyd. However, he said he felt the department handled the situation well…

Tomorrow is primary election day in South Dakota and that means that voters will be going to the polls. The year’s primary election has presented a few challenges due to the COVID-19 virus. One of the challenges for auditors across the state has been the extra work associated with absentee b…

The Deuel County Sheriff's Office continues their investigation into a Sunday afternoon crash that injured two people. Shortly after 5:25 PM emergency responders were dispatched to 486th Ave 174th St for a motorcycle crash.

Watertown Couple Goes To Minneapolis to Help in Recovery Efforts

Despite all the negative news in the media these last several days there is a good story of those reaching out to help others in Minneapolis.  Rich and Beret Ohm the owners of Fallout Shelter Ministries in Watertown went to Minneapolis this weekend to meet with others from the religious comm…

South Dakota Governor Kristi Noem activated the National Guard to assist the City of Sioux Falls with protestors shortly before 10pm Sunday night.  Mayor Paul Tenhaken signed a Declaration of Emergency which included a 10:00 PM curfew for all Sioux Falls residents after violence broke out at…

The City of Sioux Falls issued a State of Emergency and a 10 pm curfew as protesters and police clashed at The Empire Mall Sunday Night.

Tensions remain high in the Minneapolis - St. Paul area today after a weekend of continued rioting and looting caused significant damage to the city. It was announced on Friday that fired Minneapolis police officer Derek Chauvin, 44 of Oakdale, Minnesota, had been arrested and charged with t…

Codington County Up Two COVID Cases over the Weekend, No New Deaths Reported on Sunday.

Codington County added two new cases of COVID-19 over the weekend, one on Saturday and one case on Sunday.  That brings our total to 37 cases so far, 18 of those cases have recovered. We now have 19 active cases in Codington County.

South Dakota finished its second week of testing residents and staff at long term care facilities in the state for COVID-19.

Many Americans waiting for a stimulus payment do not even realize they have one in their possession.

At the direction of the South Dakota Department of Health, mass testing of all nursing home and assisted living residents and staff began during the week of May 18, 2020.  Jenkins Living Center in Watertown, SD was the first nursing home in the state to complete the COVID-19 testing.  Initia…

Growing tensions in the Minneapolis metro area led to a 3rd night of rioting in the city.  That comes after the death of 46 year-old George Floyd, a black male who died after being pinned to the ground by a white Minneapolis Police Officer who held his knee on Floyd’s neck.  Floyd’s death ha…

South Dakota Department of Health Officials says they are pleased with measures taken at the Jack Links plant in Alpena to protect its workers after officials confirmed that 59 employees had contracted COVID-19. One of those employees died. South Dakota Secretary of Health, Kim Malsom-Rysden……

The Watertown Area Chamber of Commerce has announced that the 4th of July parade will be taking place this year as scheduled.  Jen Pendley of the Watertown Chambers says it’s easy to get your parade entry signed up by visiting their website.......

PIERRE, S.D. – A temporary extension of the expiration date for certain South Dakota driver licenses has been extended until March 30, 2021 by Gov. Kristi Noem.

There’s  a three way race on the Republican ticket for the state house in District five at Watertown next Tuesday.  Competing for the two seats are incumbents Hugh Bartels and Nancy York and newcomer Watertown resident Jacob Sivertson.  At a recent chamber sponsored forum the candidates disc…

Police in Grand Forks are mourning the loss of an officer who was shot and killed Wednesday afternoon while trying to serve eviction related paperwork.

The Watertown Park and Rec Board voted on Tuesday night to keep the Family Aquatic Center closed this summer to prevent the spread of the Coronavirus. Watertown Mayor Sarah Caron says that decision was not an easy one for the board to make.....

Mother of Four Celebrates Graduation, Thanks to McDonald's Archway to Opportunity Program

A 32-year-old mother of four was awarded her high school diploma during a special ceremony at the Interstate McDonald’s Wednesday afternoon.  That’s all thanks to her hard work and McDonald’s Archway to Opportunity program.

The South Dakota Department of Health released the new COVID-19 numbers today. Codington County now has 34 cases.  That is up one case from yesterday, 16 of those cases are active. 18 cases have recovered.  State Epidemiologist Dr. Josh Clayton delivered the numbers on Wednesday saying there…

Martial law: Here's what can and can't happen in the US

Teen who cleaned up after protest rewarded with car